The working population of Americans tends to fall into one of two categories in the early A.M hours. A happy peppy morning person or a groggy, waiting for after work to chill type. The ones that need coffee in the morning, treat it like it is a matter of life or death. It is their medicine for life.

Over the last decade, we have really raised the bar as Americans on what we drink as our morning “pick me up.” The interesting aspect is that the coffee culture today is a booming one. On average as Americans, not including what we spend at home, a research paper states that the general American worker spends almost $15.00 a week to drink their joe away from home. This Isn't including data of how much they drink in addition in the home. The cost is around $1100 a year on take out coffee.

Coffee at Home
As much as we drink on the job, with statistics on other sources reporting anywhere from $1 to 5$ on coffee a day. Some people prefer to get a coffee warming device and use a Keurig. These are pre pre portioned coffee of various strengths made by a number of retailers. You can get your Starbucks or Dunkin Donuts at home and bring it to work. That is also a popular choice, the coffee carafe. This keeps your coffee warm and toasty while you check in and get settled in the office. This of course is a coffee price saving measure. Brewing a giant pot of Maxwell house will save you the most. It is estimated that you can brew up a cheap cup of Maxwell House for .08 cents a cup not including sugar and creamer. This is a straight out of the pot black cup. 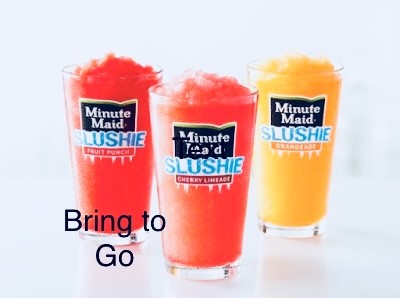 So Why Not Make the Switch
A coffee drinker is a particular being in a culture group all their own. It is a bonding experience for many. What would couples have to talk about if they do not have a newspaper and a cup of joe in front of them? It is a natural stimulant found in the cocoa bean. This means it causes most individuals to feel more talkative. It is like alcohol in a very subtle way, as it slightly reduces ones inhibitions. This doesn't mean you will go out and do anything to be ashamed of, you will just chat a bit more than you would without in many people's experiences. It is more like being the center of attention at the water cooler chat before work.

Some of the Surprising Benefits of Regular Caffeine 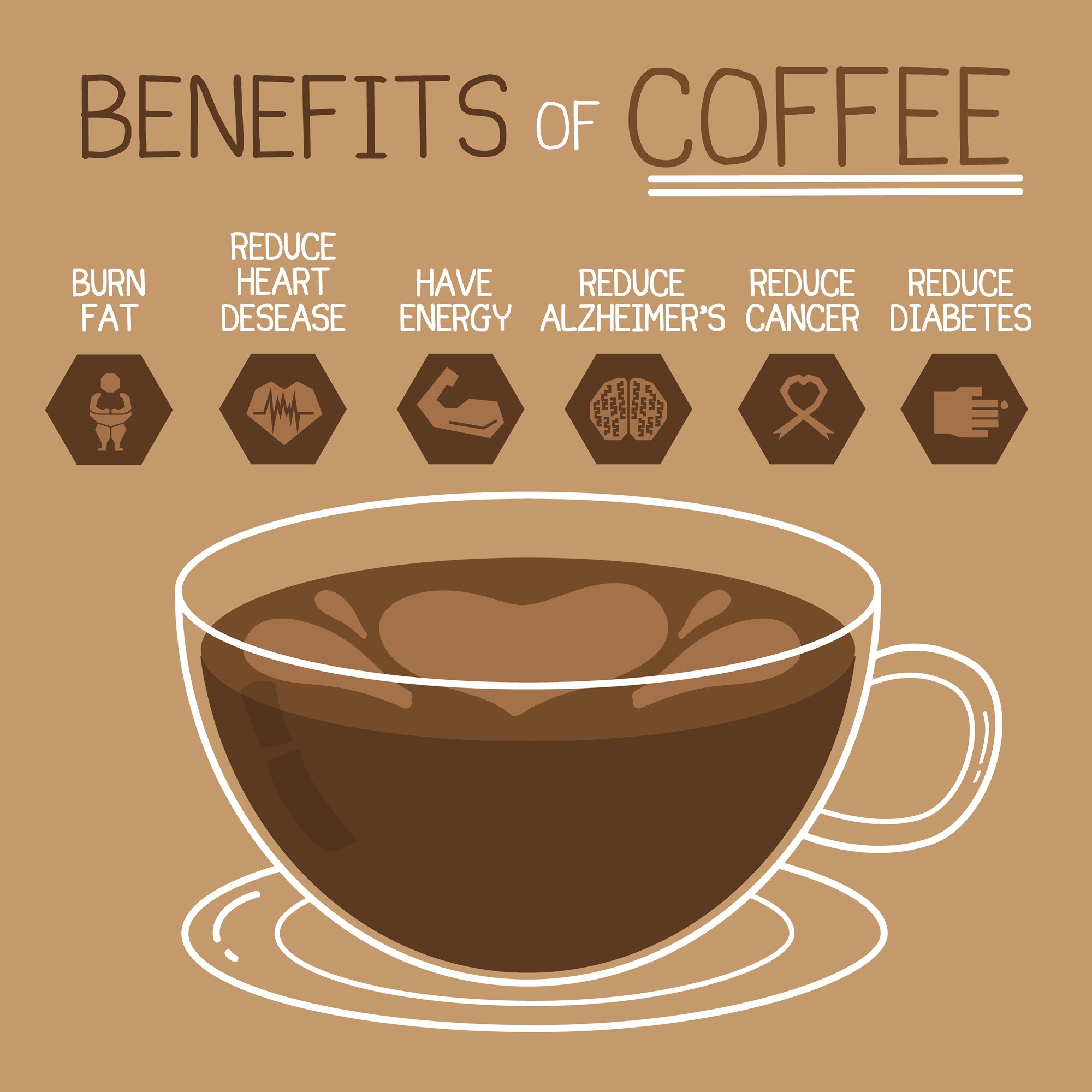 There is positive side to having moderate dosages of your favorite caffeinated beverage. As described in this blog by Justin Williams 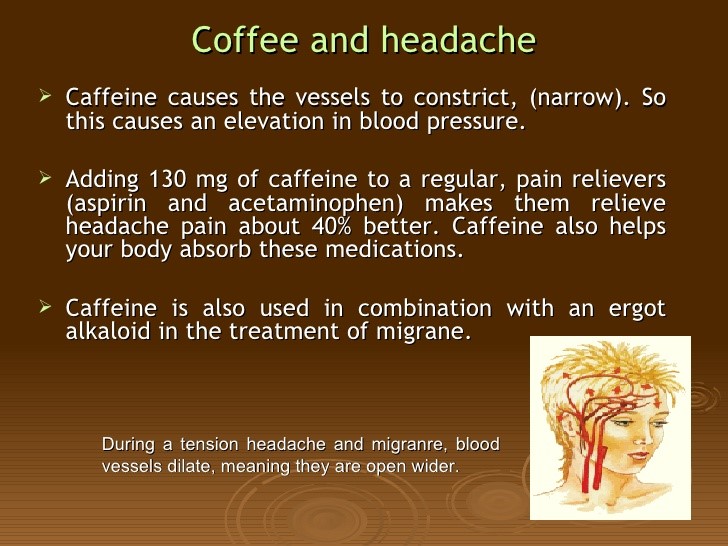 Another surprising benefit Information on headaches and image courtesy of Laura Lici. The photo above describes how caffeine affects the impact of a headache. Coffee can make you feel alert, more aware and ready to take on the grueling tasks of the 9-5ers who rely so heavy on it. Excedrin, a migraine medication actually includes a moderate dose of caffeine as it is a proven migraine reliever when taken as soon as you feel one coming on. Too much can have the adverse effect however, so don't take that extra pill and expect better results. Follow the package instructions. 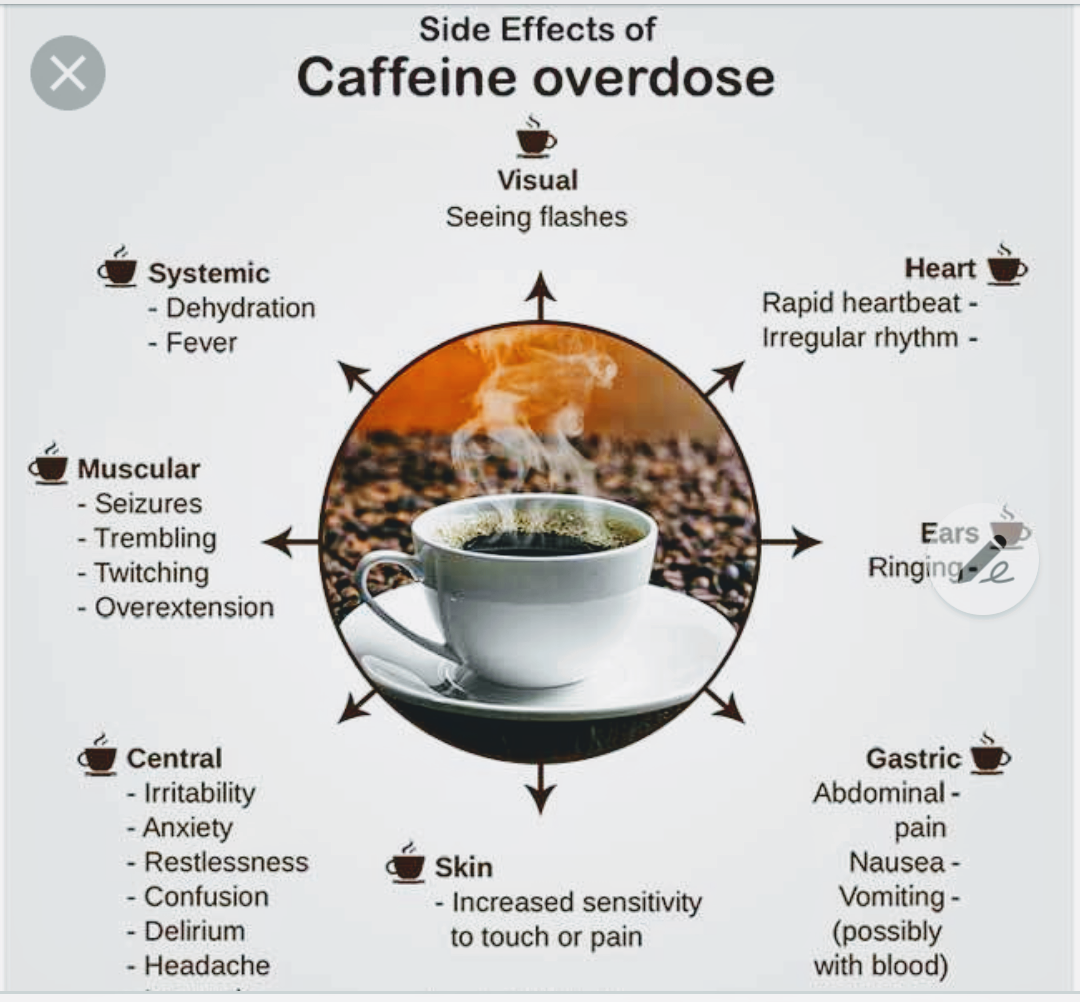 Not many read the side effects or pay attention to them. This photo illustrates some of the effects of using too much caffeine according to the extremely informational piece in this article Its Tamilnadu

● Lack of quality sleep
● Heart rate increases
● Tummy upset and throwing up
● Breathing rate goes up
● Too much causes severe headaches and anxiety to some.
● Hearing your ears ring
● Nervous twitchy behavior

Regardless of the Side Effects We are Drinking More than Ever

In a personal study of someone who is in the workforce daily, they were questioned about what they saw their colleagues drinking in a doctors office environment.
● Coolattas in all flavors come in first with extra whip cream.
● Espresso shots in at home coffee or making 12 cups for self was a popular answer.
● Hot mocha drinks that were filled with chocolate and espresso shots with extra whip cream was also a favorite.
● Some simply milked the keurig at their job and took the benefits of free shots of various flavors.

have a hard time getting going and once they are going they never stop. They don’t give it a chance and start drinking coffee right away. Many abuse the new drink of the choice called Monster Drinks and the staple Red Bull to get going. Each monster drink cost between two and three American dollars and usually the drinkers drink 5 a day on average. That is another $15 they could be saving.

So Why the Insane Level of Popularity?

Although Europeans drink more coffee in an average year than the United States, people that notice the habits here are especially distinctive. We could be called coffee socialites. It is a social thing to sit down with other people and have a cup of coffee. It is something done in many situations
● Casual first dates instead of a heavy dinner when you want a quick date.
● Catching up with friends on your lunch hour without taking up too much time.
● In many places older gentleman and ladies get together in small towns at the local coffee shop or McDonald's type of establishment.
● Business meetings that you don't have a lot of time.
● It is a great way to meet a potential mate in a coffee shop. People are alert and friendly and tend to be more conversational in this atmosphere.

An odd thing to take note of is even if Europeans drink coffee more often, their portions are smaller so they do not seem to be as affected by the caffeine in it. That is how they reap the benefits without the side effects. Just like food, use portion control. With 90% of coffee drinkers drinking their coffee in the morning, it is definitely a cultural obsession. You will see cups of foam lying around everywhere you go if you really look around in your surroundings. The cups are getting bolder and more attractive and especially the cold drinks. They are putting sprinkles on top of whip cream and putting in more and more flavors.You can also see students all over college campuses, they tend to drink it earlier in the afternoon until it is late, and that evening and then wonder why they have a hard time sleeping. It is a social thing and it keeps them alert for homework. You can also see police officers drinking it regularly while they are working and as a habit of boredom during slow times, they just keep drinking cup after cup.. It is a drug but as socially acceptable one. People even give it to their children it is considered so normal today. It was considered an adults only beverage 20 years ago, that is how fast coffee has taken over American lifestyles.

The Size of the Cup 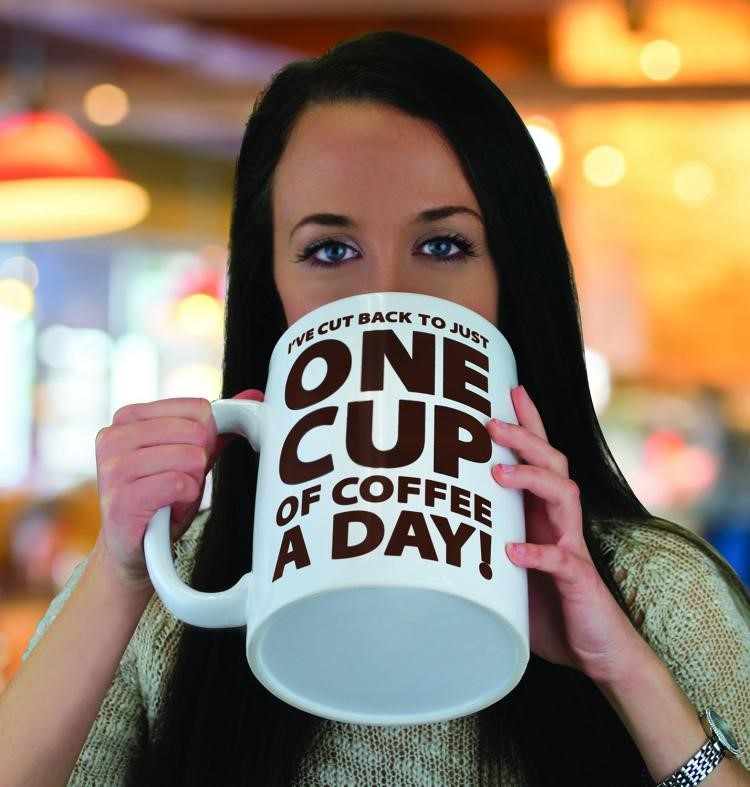 This picture is a play on our obsession with coffee.

The normal cup of coffee is 200 mg of caffeine and weighs only 6 ounces. This picture also shows the outright justification of going larger. It is available at Oddity Mall. A normal serving is the size of a small coffee cup that can fit on on a a small tea holder plate. Have you seen Starbucks give too many 6 ounce cups out to anybody? They would not have any customers. The American way is the bigger the better. Not many until they do some research take into account the benefits of cutting down by a cup or two and reaping the benefits of caffeine instead of overdosing on it. When used appropriately, it is considered a “smart drug.” There is other alertness aids in energy drinks like ginseng and taurine which work together to actually make your brain work better in moderation. That means one can. After that another one 4-5 hours later will prevent the coffee crash and you will get the benefits without all the side effects. That is limiting yourself to two servings a day. In a Monster drink of 16 ounces, that is a half of a can twice a day, to put it in perspective. It does make you smarter while it is wearing on fully and more productive. It can make you a bit moody if you have too much as well as all the other side effects mentioned before. Enjoy your beverage as suggested and you will be surprised at how much better you feel when you cut back some. 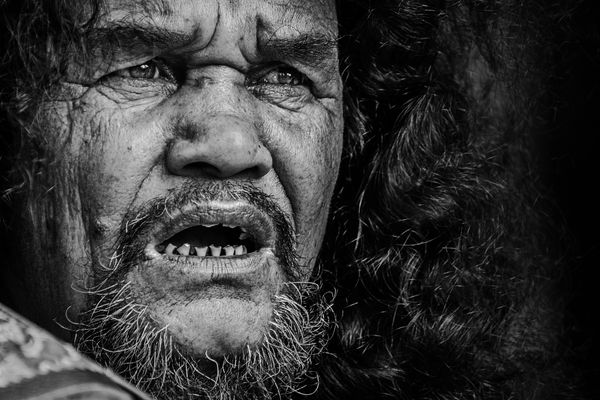 Dont like programming, no problem. You can still make it in through the matrix. You wonder how, lets see whats out there. When I was a kid, I loved history